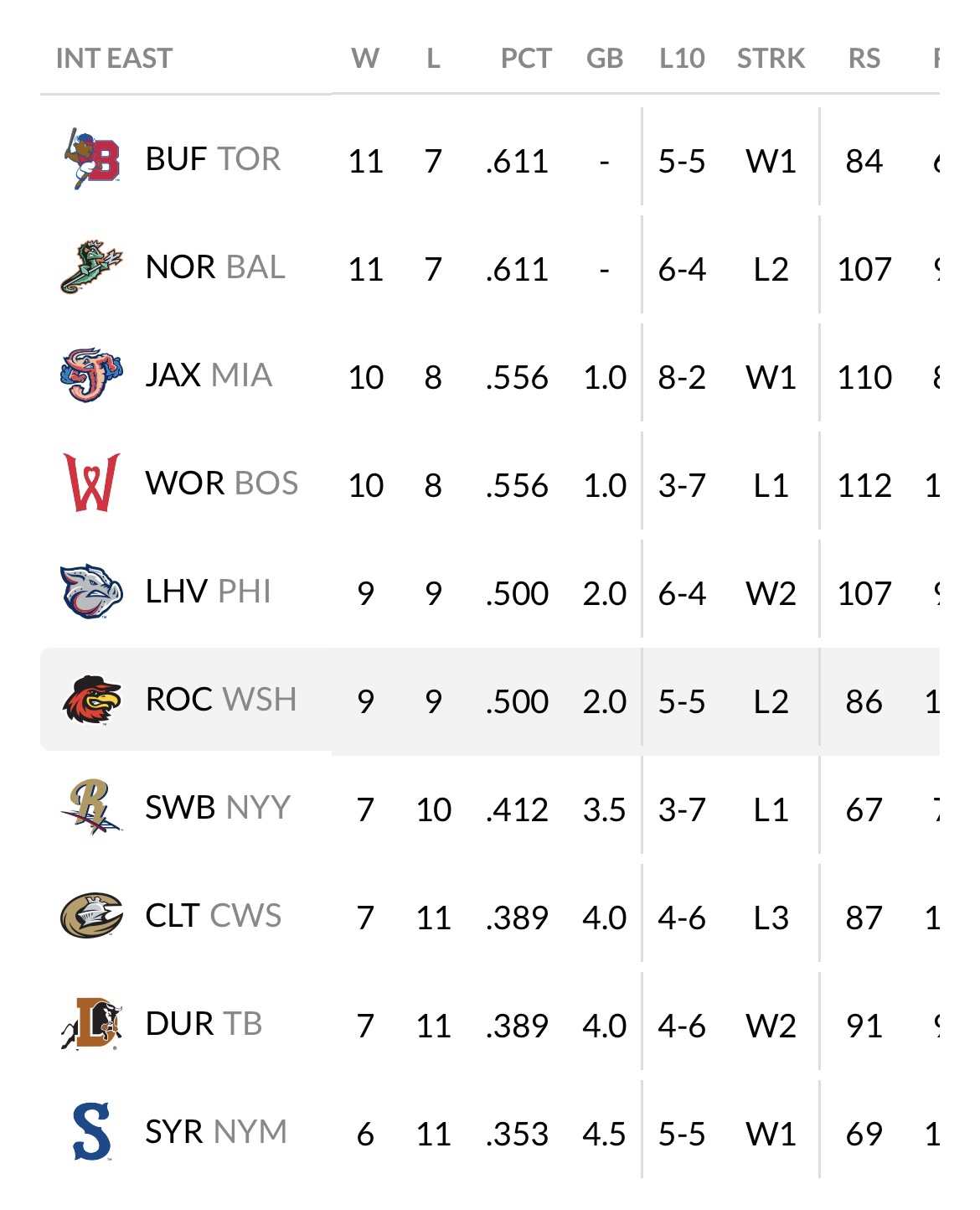 Ok, I will freely admit that this blog post is late. Sometimes real life interferes and makes it impossible to find a bloc of time to sit down and properly put thoughts together. But now that I’ve found a few minutes, let’s go ahead and discuss the Jumbo Shrimp, shall we?

What a week for the Shrimp! They took five out of six from the Gwinnett Stripers – featuring Ronald Acuña Jr. – and stormed back into the top half of the International League East standings

Third place! Not too shabby. And but for a massive bullpen letdown on April 23rd, the Shrimp would actually have been tied for first place. It’s great to see the team climbing back towards the top.

After the season-opening series against the WooSox, I was fearful that we would be in for a long summer in Jacksonville. Maybe the poor play was a byproduct of the shortened spring training for a few of the guys who happen to be on the 40-man roster. Maybe it was the fact that the players may not have played as a team much before the final AAA rosters were set. But whatever it was seems to have gone – for now, at least – and the Shrimp are getting the wins against the teams they are supposed to beat.

The early part of the week provided some easier wins for the Shrimp. The end of the week saw the return of the Cardiac Shrimp! (As Shrimp broadcaster, the incredible Scott Kornberg is fond of calling them). As I noted above, but for a Huascar Brazoban meltdown in the 9th inning on Saturday night, the Shrimp would have swept the Stripers.

It’s hard to single out any one player for the continued success of the Shrimp offense. The entire team is clicking at the moment. Seriously. Timely hits, moving runners over, taking extra bases…they are doing it. Charles Leblanc – the best waiver pickup of the off-season – and Lorenzo Quintana continue to pace the Shrimp. They have consistently been very good. Erik Gonzalez, Norel Gonzalez, and Lewin Diaz have also been playing very well. One thing the team needs to do – collectively – is cut down on the strikeouts.

On the mound, Max Meyer continues to dazzle. The kid is simply amazing, and we should all be counting ourselves lucky to be able to watch him here in Jax. To date, he has a 27/5 K/BB ratio, and has only allowed 4 earned runs across 4 starts. He’s going to be called up this season. It’s just a matter of when.

Braxton Garrett has also done well, with a sub-4 ERA and a 18/7 K/BB ratio. I’m hopeful that with all of the attention on Meyer, Garrett can go about his business and show that he is the quality pitcher we all know he can be.

I still have my concerns about the bullpen. Too many times now we have relievers come into the game and make the final result way closer than it needs to be, or blow a save completely. Hopefully as the season progresses and the starters are fully stretched out and pitching well, there will be less of a need for a parade of relievers. But hey, if the offense keeps putting up big numbers, that will certainly mask any bullpen shortcomings.

The Shrimp are in Charlotte this week. The club got off to a good start with a 9-2 win in an early game yesterday. We won’t get to see the boys again until May 10, so be sure to follow along on milb.tv and ESPN 690/espn690.com. And of course, on my Twitter feed where I dutifully tweet/retweet the most important stuff.