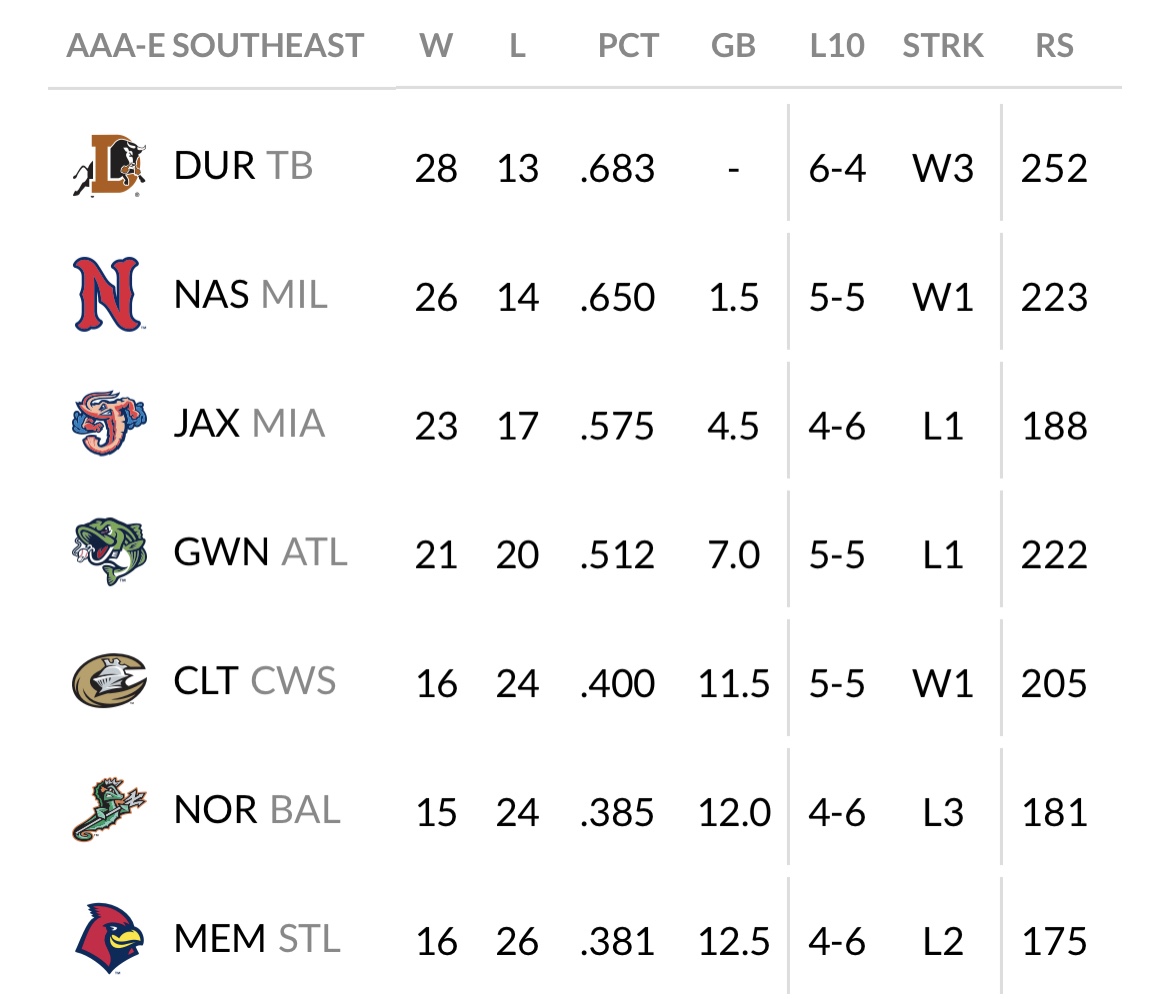 Thanks to the remnants of Tropical Storm Claudette, the Jumbo Shrimp were rained out in Charlotte this afternoon. While it would have been nice to have a chance to come home with a series split, I’m sure that the club is more than happy to have a couple of days off in a row to rest, recharge, and get ready to run with the Bulls again as they make their way to 121 Financial Ballpark starting on Tuesday.

As it was, the Shrimp dropped three of five in the Queen City, getting thumped in each of the three defeats. The long ball seemed to be the culprit in each of the games as the Knights appeared to be able to go deep at will. Not that the Shrimp didn’t provide some offense of their own last week – it just wasn’t enough.

After 40 games (with two rainouts to be made up by the Shrimp) here are the Southeast Division standings:

As you can see, the Jumbo Shrimp are comfortably in 3rd place, 3.5 games back of Nashville and 3.5 games ahead of Gwinnett. It’s frankly quite amazing that the Shrimp are in 3rd place given their negative run differential (-19 runs). But it certainly shows that the Jax pitchers need to do a little more run prevention to right the ship.

One stat that really amazes me if you look at the Triple-A Standings is that the Jumbo Shrimp are the only team in Triple-A to have both a winning record and be in third place or above, and have a winning record on the road (16-7) and a losing record at home (7-10). Hopefully the Shrimp can flip the script this week when the Durham Bulls come to town.

The Jumbo Shrimp will be renewing the Surf and Turf Series with the Bulls this week. The Bulls lead the best of 36 (!) series 7 games to 5. The Bulls thumped the Shrimp when they were in Jax at the end of May taking 5 of 6 games and holding the Shrimp to just 12 runs over the series. One bonus for the Shrimp is that “the number one prospect in all of baseball” Wander Franco will not have a chance to beat the Shrimp. He is being called up to the Tampa Bay Rays on Tuesday. A shame that we won’t get to see him once again in Jacksonville, but it’s probably for the best for our team!

The series against the Bulls this week looks to be loads of fun with lots of promos by the Shrimp. You can check that out here. You can get your tickets here: https://www.milb.com/jacksonville/tickets/single-game-tickets

We hope that all the Dads out there had a fantastic and relaxing Father’s Day. Thanks for all that you do.

Finally, this feature is way shorter than I had intended it to be. Multiple paragraphs went missing overnight, and I’m not going to re-create the wheel herein, especially as it needs to be published. My apologies. Lessons learned for this author, though.

Happy Baseball everyone. Have a great week!