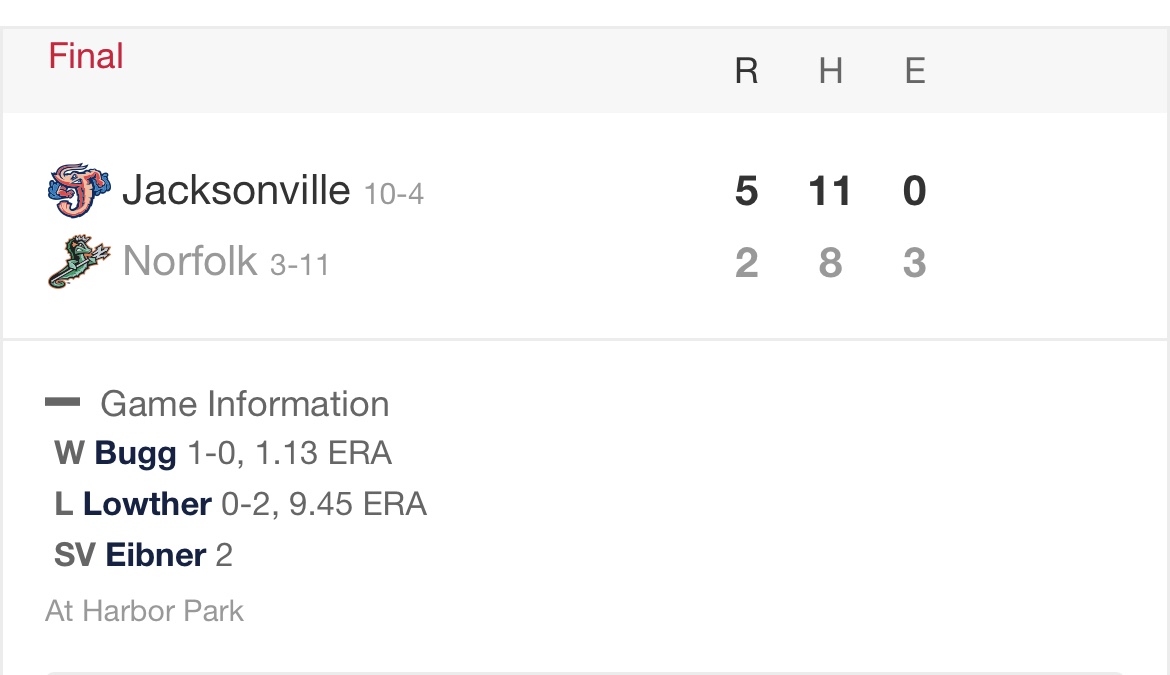 The Jumbo Shrimp overwhelmed the Norfolk Tides on Wednesday evening, banging out 11 hits on their way to a 5-2 victory at Harbor Park. The Shrimp became the first team to record 10 wins in the Triple-A East Southeast Division. The club is also in sole possession of first place in the division due to Gwinnett’s extra-inning loss at Nashville. Not bad for a day’s work.

The Jumbo Shrimp were led – and please stop me if you’ve heard this before – by Jesús Sánchez who went 4 for 5 at the plate and raised his average to an amazing .510. Sánchez also provided another outfield assist gunning down a runner at home.

Brian Navarreto had the big hit in the game with a 3-run double. His average now stands at .353, and I feel like we should be talking about this a little more. Yes, it’s still early, but this is offensive production from a catcher that you don’t often see. And he’s batting eighth! It has more than made up for some of the struggles higher up in the lineup.

On the mound, Josh A. Smith started for the Shrimp and went four complete. Parker Bugg earned the win in relief. Brett Eibner got the save. The Shrimp rotation has been good so far, but rarely get past the 4th or 5th inning. Whether by necessity due to the 20-month layoff due to COVID, or by design, I’m hopeful that some of these starters will stretch out sooner or later.

For Norfolk, McCoy and Nevin led the way with two hits apiece. Three errors hurt the Tides in the field. But hey, we’ll take it.

The clubs have a quick turnaround with a 12:05 pm first pitch on Thursday. Your favorite Jumbo Shrimp blog will be in attendance at Harbor Park for the game and will keep everyone updated via our Twitter page – @TheCatchBlog. We hope you’ll follow along. We’ll have some stuff on here as well.

Happy Baseball! Enjoy your day everyone.