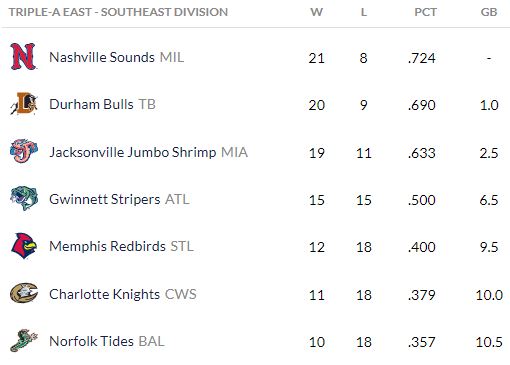 The Jacksonville Jumbo Shrimp had a very successful week/weekend in Gwinnett, taking five of six games from the Stripers, including the last four in a row. The Catch was present for the comprehensive win on Friday, but Saturday’s and Sunday’s games were equally exciting. The Shrimp used extras on Saturday to come away with the 8-5 win, while Sunday saw a 6-3 victory for the troupe. The four game winning streak solidified the Shrimp’s spot in 3rd place in the Triple-A East Southeast Division table at 19-11.

Nashville has been the hottest team in Triple-A baseball over the last few weeks. Though they’ve lost their last three, the Sounds rattled off 15 wins in a row at the end of May/beginning June to rocket into first place in the Southeast Division. The are tied with Omaha for the best overall record in Triple-A ball at 21-8. Thankfully, the Shrimp only see the Sounds once this season, and it helps that it will be in the comfortable surroundings of the 121 Financial Ballpark.

The Norfolk Tides roll into Jacksonville once again this week. This will be the third series against the Tides this season. The Jumbo Shrimp have dominated over the first two series of the season winning nine of the first 12 games between the two teams. Norfolk has played better baseball of late, but remain anchored to the bottom of the Triple-A East Southeast Division table at 10-18.

Most importantly, in the race for the Navy Town Showdown title, it remains Jax – 9 Norfolk – 3.

I hope that everyone enjoys their baseball over the next week. As the old saying goes “Happy Baseball!”