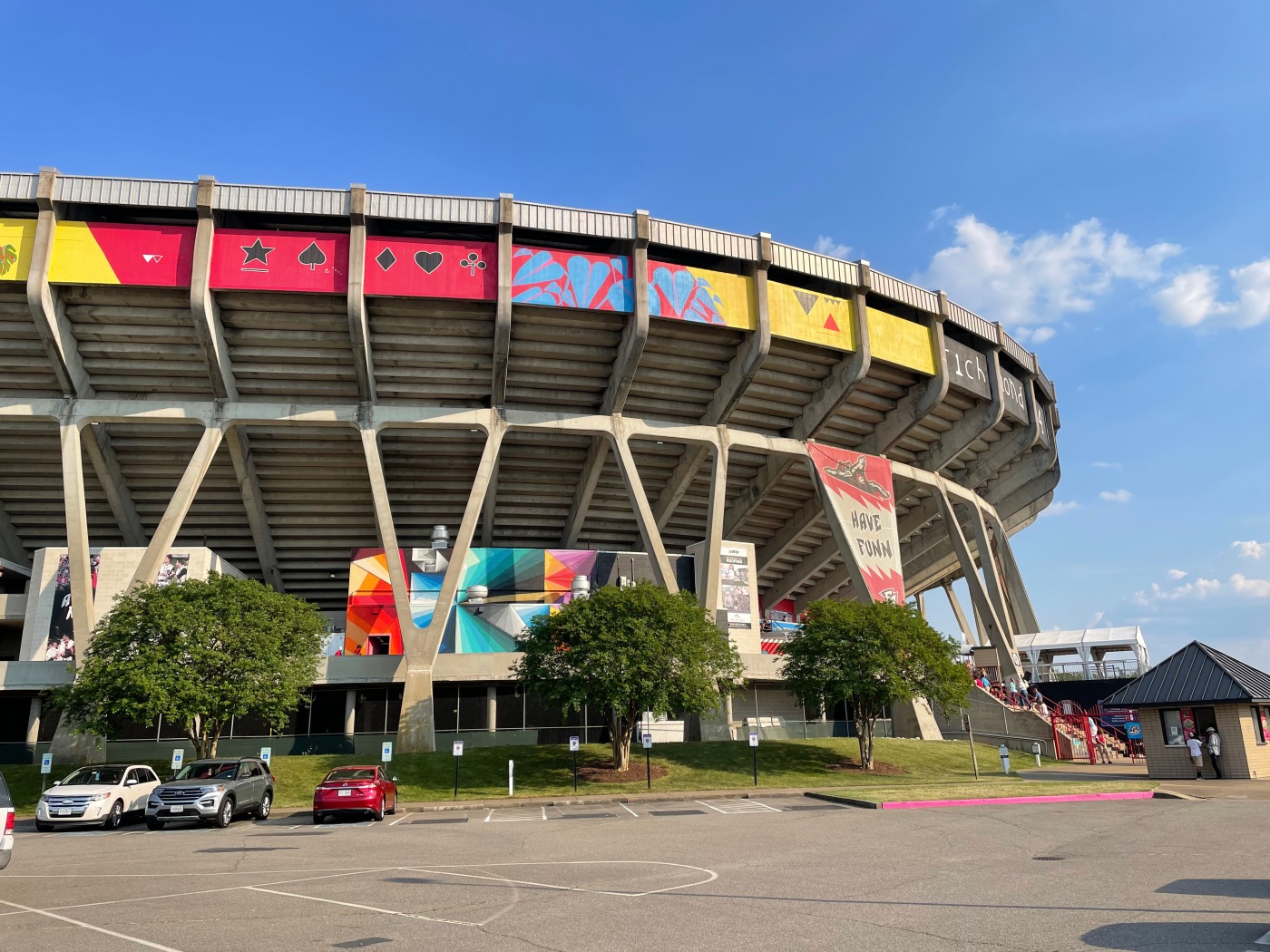 As a part of the journey up to Virginia to see our beloved Jumbo Shrimp last Thursday, I tacked on a side trip up to Richmond to see another new ballpark – The Diamond, home of the Richmond Flying Squirrels.

The Bowie Baysox were in town, so after seeing the Jumbo Shrimp beat one Orioles affiliate, I figured why not scout the rest of their farm system? Seriously though, Double-A has some of the best young talents in the game and I’d never pass up a chance to see some good baseball.

The Diamond itself is a decent enough park. It opened in 1985 and well, it looks it’s age. Concrete and a cantilevered roof that is more reminiscent of the 1970s-80s concrete doughnuts than the current era of brick exteriors and open concourses. I remember seeing pictures of the park in the International League Media Guide when I was a kid and the park hosted the Braves’ Triple-A team. I thought it was very cool looking. Big and modern-ish. But no more. The Diamond is well past its sell-by date, and the Flying Squirrels have acknowledged that a new stadium is an absolute must. In fact, if the Flying Squirrels don’t have a new park by 2025, it could bring affiliated baseball to an end in Richmond. Let’s hope that doesn’t happen. There’s a lot of good baseball history in Richmond.

Another reason to see this game was to see the Orioles’ top prospect, catcher Adley Rutschman. I can’t recall ever seeing a number one overall draft pick so soon after he’s been drafted. (I’ve seen others after they hit the majors, to be certain.) But let me tell you, he seems ready to move up soon. Great eye at the plate even if the average is lower than you’d hope for, lots of speed on the bases (unusual for a catcher), and good behind the plate. Needs to work on his framing, but that could be a consequence of some poor/unframable pitches. In fact, a number of the Bowie players – especially their pitchers – should be moving upwards soon. I think they would make Triple-A Norfolk a better team.

Richmond featured a number of San Francisco Giants prospects that seemed to need additional seasoning in Double-A for a while. The Cubs’ Jason Heyward’s little brother Jacob Heyward plays for Richmond, but that was one of the few recognizable names.

As for the game itself, Bowie jumped took a 6-0 lead and almost had the shutout, but they gave one up in the bottom of the 8th inning. The final score was 6-1 to Bowie.

The fans seemed halfway engaged in the game. But at this point, I think people are just happy to be able to be outdoors and seated next to friends and family without masks, which were indeed in short supply in both Norfolk and Richmond.

So there’s the story of Minor League park Number 26 (19 still active). Hope you all manage to find your way down to Richmond as well. You’ll enjoy it!