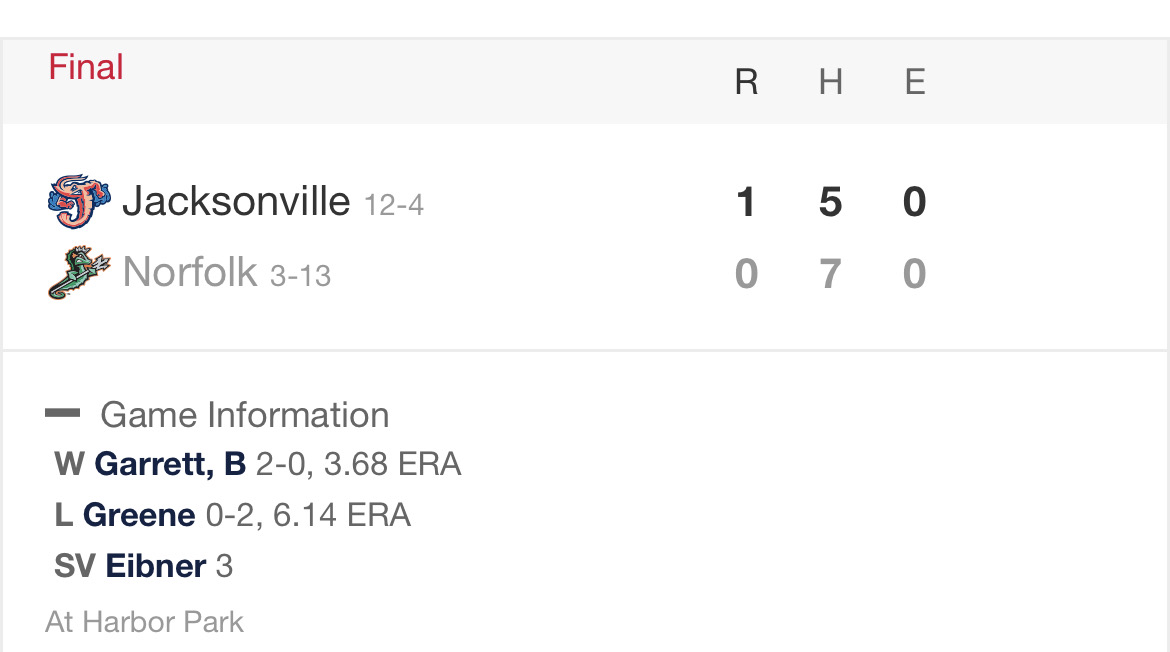 The Jacksonville Jumbo Shrimp extended their winning streak to five games with a 1-0 win over the Norfolk Tides on Friday evening.

A fantastic starting effort from Braxton Garrett, combined with stellar relief efforts from Alexander Guillen and Brett Eibner, kept Norfolk off of the scoreboard. The Shrimp pitchers gave up seven hits and struck out eight. Garrett earned his his second win of the season with six strong innings, while Eibner picked up his third save. This was the second game in this six-game series in which Jumbo Shrimp pitching have held the Tides scoreless.

Connor Greene was the tough luck loser for the Tides, as he went seven strong giving up four hits while striking out seven. The lone run allowed came in the top of the 1st inning.

At the plate, Norfolk actually outhit the Shrimp seven to five. However, the Shrimp made the most of their hits by pushing across the lone run of the game courtesy of a Luis Marte single. Marte led the way on offense with two of the Shrimp’s five hits. Norfolk was led by Zach Jarrett with two singles.

The victory takes the Jumbo Shrimp’s record to 12-4, which continues to lead all of Triple-A baseball. They have also held their opponents scoreless now for 13 consecutive innings. It will be fun to see how long that streak can survive.

The teams play gave five of their six game series tonight at 7:05 pm. Shawn Morimondo Luis Madero goes for the Shrimp. Josh Rogers will be on the mound for Norfolk.